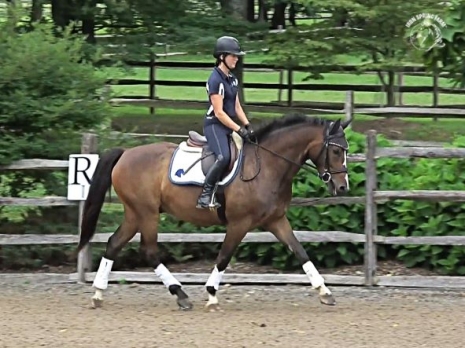 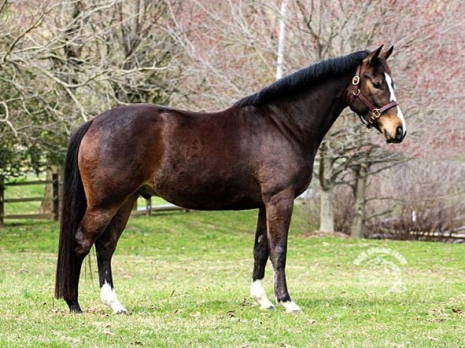 Now started professionally under saddle, Noah shows three balanced gaits with good power from behind. He hacks confidently and displays an excellent aptitude for jumping. He is best suited to a professional program and has the versatility to excel in a variety of disciplines, a trademark of his famous sire. Radiographs available.

Sire Contango stood as one of the rare Preferent stallions in North America, an honor awarded by the KWPN to stallions that produce offspring with exceptional qualities in movement and conformation. A legend in his own time, Contango competed successfully as a Grand Prix Show Jumper and later won over 30 Grand Prix Dressage classes, including at Dressage at Devon. Contango’s sons and daughters inherit their sire’s athletic ability, gaits, and versatility, and have been successful all the way up the FEI levels – including the Olympic horses Ravel and Caravella.

Dam Cayenne W., bred by noted Grand Prix trainer and rider Wolfram Wittig, achieved superb success as a young dressage horse in Europe. In 2006, she was the Reserve Bundeschampion of the 4-Year-Old Riding Horses. At the World Young Horse Championships in Verden in 2007, Cayenne arose as the undisputed winner of the 5-Year-Old Riding Horses class. With 9s on her trot and general impression, Cayenne’s final score of 8.82 secured her the World Champion title. She continued a successful career in sport through the Grand Prix level before being sourced as an important part of ISF’s broodmare band. Her sire, Carabas, was successful through the Grand Prix level and represented Denmark at the 2009 European Championships.

For more details or to set up an appointment to meet Noah ISF, please call (610)-383-4717 or email sales@ironspringfarm.com!